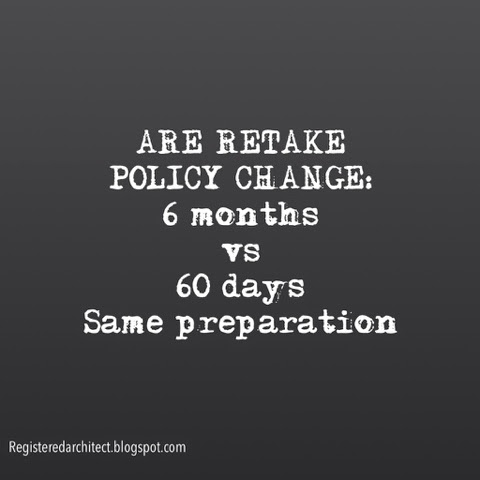 Other than the new ARE 5.0 which is set to come out in 2016, the next biggest news in the licensing world is the retake policy change. Having gone though the seven exam process and failing my first exam, it is mentally & physically exhausting to have to retake. Let's be honest- it sucks the momentum out and drops you in a hole of depression. The ambiguity of NCARB's score reports may not help clarifying your errors either. Let's look at this new rule briefly and my opinion as to why your preparation shouldn't change just because the rule has.

NCARB is implementing a 60 day (2 months) retake policy as oppose to the current "6 month rule." Take a look at their reasoning here: The NCARB Blog. The full news release can be found here: Revised Retake Policy. This new policy will be implemented on October 1, 2014 and is said to be proactive towards those waiting out an existing failure. What does this mean to interns and A.I.T.s? The short answer: it allows a failed exam portion to be retaken sooner. In theory shortening the time necessary to pass all exams if you do fail one of more. Or does it?

Thinking more objectively on this change, those of us that have experienced the 6 month waiting period are probably elated and relieved. Conversely the thought pattern and study habits of those that will benefit from this change should not feel as though the exam has gotten any easier. The same if not more focus and dedication is required. Don't let the lessened retake policy allow you to be complacent while studying. "If I fail, it's only 2 months and I can retake it." Don't be this person. Once the exam material is out of your mind, it can take some extra effort to gain momentum again.

Bob decides to space his exams 2 months each and 3 months for Structures. He studies hard and thoroughly but still happens to fail one exam and has to retake it. His total ARE exam time equals (2 months X 6 exams) + (3 months X 1 exam) + 6 month retake period = 21 months or 1 year 9 months.

Jane decides to space exams 6 weeks (1.5 months) apart, even the Structures exam. She has a more relaxed approach. Studying when she can and cramming in the last two weeks for each section. She ends up failing Structures twice and 3 other exams one time a piece. Her total ARE exam time equals (1.5 months X 7 exams) + (5 exams X 2 month retake period) = 20.5 months or 1 year 8.5 months.

Looking at this example, these two have similar time frames but different approaches. Additionally, no time was added to Jane's example for procrastination or lose of momentum with multiple failures.

Bottom line: The retake policy should be an afterthought not an initial one. Study hard, be thorough & confident. Go in & give it your all.